Skip to content
Last night, my family and I attended the Dahl Mountain Photography Exhibit artist reception. This event is hosted by the Dahl Arts Center in Rapid City, SD. My photograph, Wind Carved Snow Drift, is one of the 49 pieces on display. The exhibition started yesterday (March 10, 2017) and ends April 29, 2017.
Visitors have the opportunity to vote for the Peg Sagen Memorial People’s Choice Award, which will be announced after the show ends.
My photograph is printed on Acylic and is 12×24 in size. This is one of my favorite images and I love how it looks behind acrylic. You can read more about my printing styles here. 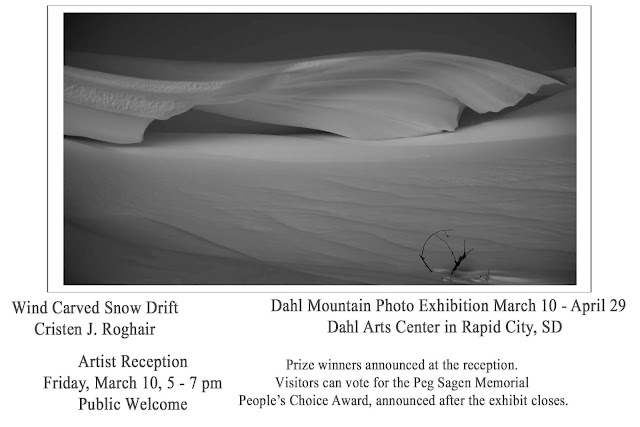 This year’s judges were Steve Babbit (Photography Professor at Black Hills State), Chris Huber (Photo Editor of the Rapid City Journal) and Ray Tysdal (Professional Photographer). Last year, both Steve and Chris judged the show which I thought would be the case this year as well. When I realized Ray was also a judge, I was rather excited because I deeply admire his work.

Wind Carved Snow Drift received the Best of Show award! When Ray presented it, he said there was no mistaking which photo was chosen for this. To hear his words and to meet him was especially meaningful for me. 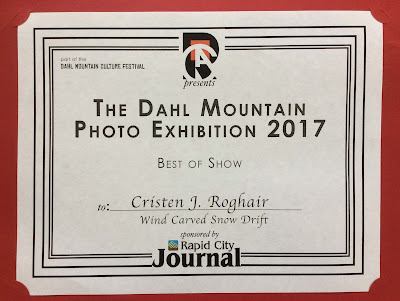 I feel both greatly humbled and absolutely ecstatic for this photograph to receive such an award.
Thank you, to all!