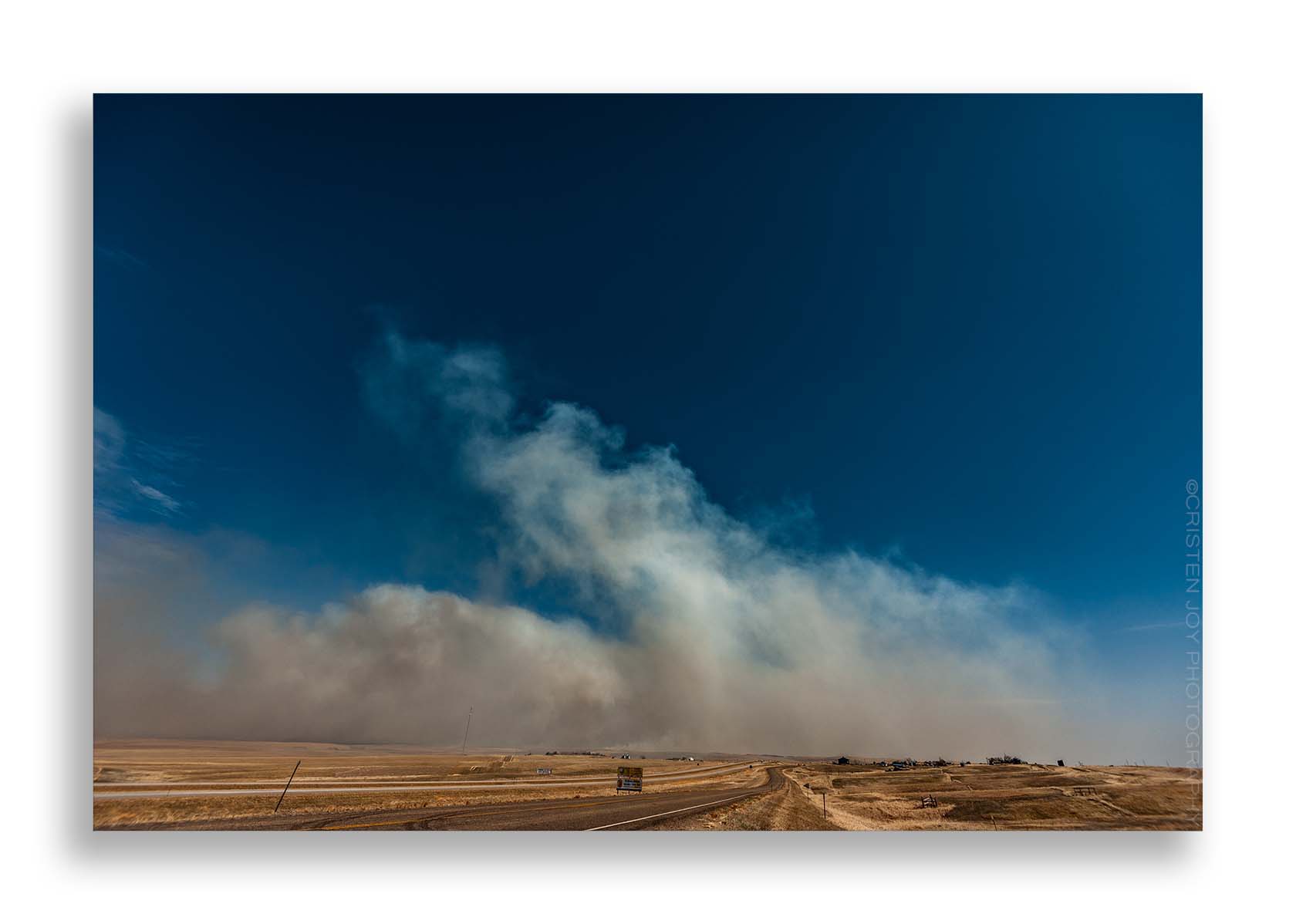 Words can not accurately express the shear panic of billowing smoke and fire thundering in the direction of your home. A prairie fire and 65+ mph gusts of wind are a deadly mix.

My husband, Marty, received a call of fire near our property where his parents live and where he grew up. He sped that direction, trying to call them but the electricity was out. He was able to reach them, urging them to prepare for evacuation.

Living in open landscape, you can see smoke for many miles. During times of dry seasons, such as the prairie is currently in is always a time of awareness to what can happen in a second. Of all the prairie fires I’ve witnessed from a distance in our corner of the globe, I have never seen such threatening sights as March 29th, 2021.

I hadn’t heard a word from Marty since his call and about 30 minutes later we decided to evacuate. From our hilltop ranch home, the thundering smoke, evidence of fire below, was headed straight for our house. I estimated it was about five miles away.

With the unpredictability of the fire’s travel and the wind speed strength I had no idea how the fire direction would change and how fast it would descend upon us. I didn’t want to assume anything with this fire.

What do you choose to take in a moments notice with the added anxiety of your husband gone in the midst of the fire and two kids who are traumatized? My sister-in-law, a few hundred miles away with fears for her parents and childhood home, gave a few helpful suggestions.

We loaded our most precious treasures as fast as we could (I will now have an evacuation list, just in case). I called my dad in Illinois to pray for us, praying for the Lord’s mercy. My daughter was crying and praying out loud and said, “My heart is beating so fast!” We stopped, took deep breaths and prayed.

The last treasure I grabbed was an original painting gifted by a dear group of friends. I looked around my home, asking the Lord to be able to return to the same condition.

Pastor Jim and Lynette arrived shortly before we left. They drove our old pickup with dogs and we all headed west to my brother-in-laws, out of the line of the fire.

With the kids distracted playing with cousins, I left to track the fire’s travel from a safe hill west of Okaton.

Fire departments from the surrounding communities rushed to aide. I-90 was shut down, as well as our highway traveling between Okaton and Murdo.

The fire did not reach our house and jumped I-90 a few miles east from us, as well as tunneling through the railroad bridge. It then jumped our highway and was stopped a mile or so south. Totaling about nine miles of destruction and over 9,000 acres of farm and grassland. My husband and I lost about 1,400 acres of grazing land, both what we own and lease. We also lost 144 of our choicest hay bales to feed the cows during calving season.

While I was evacuating and doing my best to keep the kids safe, Marty was in the midst of the fire as it surrounded his parents place. He and his brother were trying to save the yearling heifers, who would be our replacements next spring. They got them out of the corrals and a few other cows that were there out to a larger pasture. The fire was surrounding them.

Marty could see the smoke going through Hanson Creek, where our herd was. He thought we’d lost them. My mother-in-law, watching from afar, could see smoke surrounding her home and believed it to be gone.

When the earth totters, and all its inhabitants, it is I who keep steady its pillars.

The fire did not destroy a single occupied building, though it came right behind our sheds and across the driveway from my in-laws home. The cows were protected in a strip of pasture with fire on both sides of them. There is no other explainable means than the Lord’s mercy.

Marty spent the night, with very little sleep, at his parents keeping an eye on hot spots and putting out sparks. The fire department kept their night vigil across the burn site keeping watchful eyes on what could reignite, especially since the wind had not let up. They continued through the next few days as well.

Words can not truly express how grateful I am for these volunteer firefighters, putting their lives at risk and their families in anxiety.

I’m also so thankful for our local electric coop, busy the following day putting in many, many new poles. (Updated note-they were out that very day replacing poles and restoring power in horrible smoke, ash, and dusty conditions as they fought the wind.) The lineman have had a long and busy March with the snow storm we had early that month and power out in a large region for long periods of time.

In a small community, the volunteer fire fighters, ambulance crew, sheriff department, electric coop and the water company aren’t just workers I pay or come to my rescue. They are people I went to high school with, neighbors, members of the community I’ve known a long time. They’re family. Their support takes on more meaning to me, a girl who spent a lot of her time in urban areas where I didn’t know people in this capacity. They are people whose roots run deep in this community.

A week later after the fire, I spent the evening in the pasture where the cows had been. It was the most peaceful moments of the previous week.

Why was it so peaceful? The grass is already coming back!

I marveled at the redemptive nature of prairie grass. The roots run deep which means that though above ground they are destroyed, there is still life beneath the surface.

We all suffer tragedies and loss in varying degrees. They should not be compared to each other for we are all different and have different journeys and experiences in life.

I can say now, looking back on numerous experiences that “God only gives us the grace for the situations in which we are called.”*

All week long these words to Audrey Assad’s Good to Me have been running through my mind:

The photographs and writing in this post are strictly for the reading and viewing of my family, friends and patrons. Any use of them for any reason violates the U.S. Copyright Law, where all of my work is protected. Thank you!

*Cameron Cole, Therefore I Have Hope